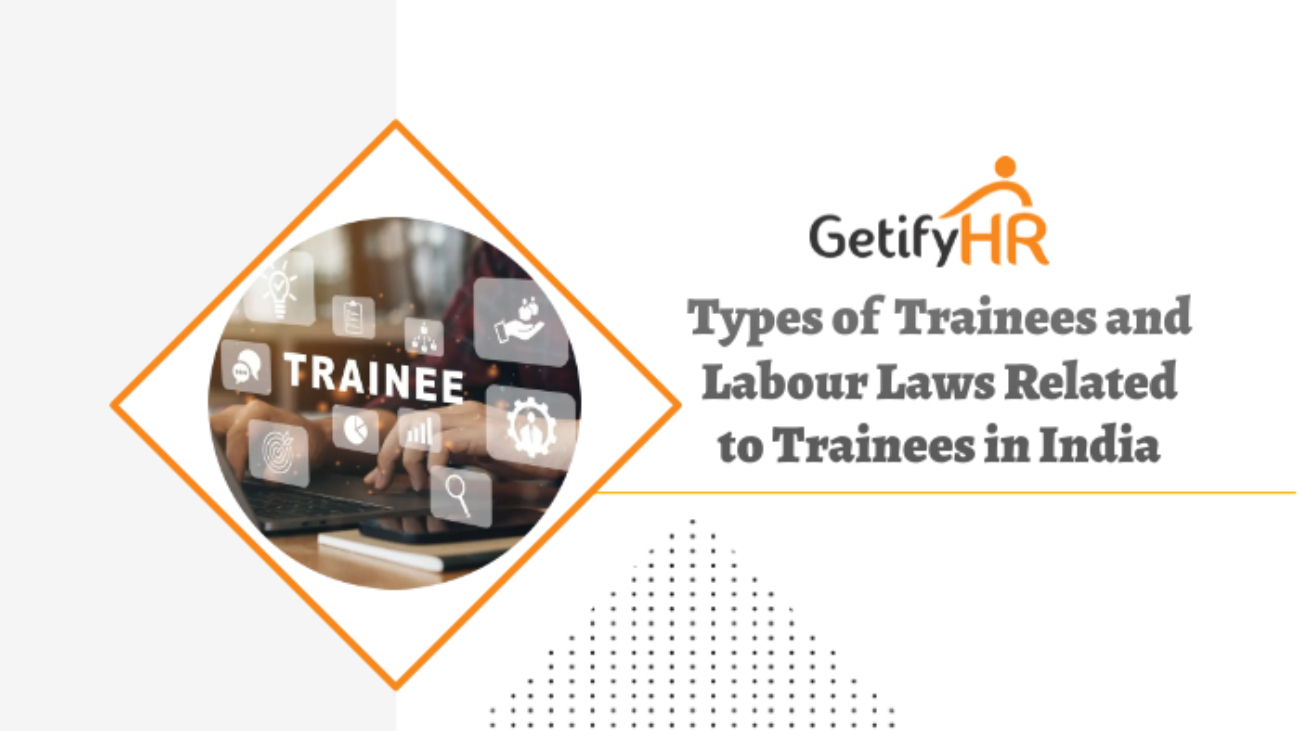 In India, there are no specific laws that determine or include the word ‘trainees’. We can identify three types of people who undergo training. They are Trainees, Interns, and Apprentices.

As mentioned earlier, trainees are those individuals, usually, freshers, who lack specific skills and who undertake the specified training as ‘trainees’. Upon completion of training, they may be absorbed into the organization if found fit. Stipend is paid during the period of training.

An apprentice is a person who trains for a career by working under the supervision of a highly experienced individual or worker. The apprentices have a formal contract with the employer. The apprenticeship follows a clear plan and includes on-the-job training combined with an educational curriculum. The individual comes under the Apprentice Act, 1961. Apprentices are paid stipends ranging from Rs:9,000/- to a high of nearly Rs:21,000/-.

In India, there are no specific labour laws that include trainees. A lot of confusion persists regarding whether they are eligible to receive the benefits that normal employees get. There are instances where trainees are looked upon as employees, and organizations that engage trainees should be aware of certain facts before engaging them.

Are trainees eligible for EPF?

Are trainees eligible for ESIC?

Trainees are generally paid a stipend. If the trainee satisfies Sec.2(9) of the ESIC Act, then he is considered an employee and is eligible to be subjected to ESIC contributions. 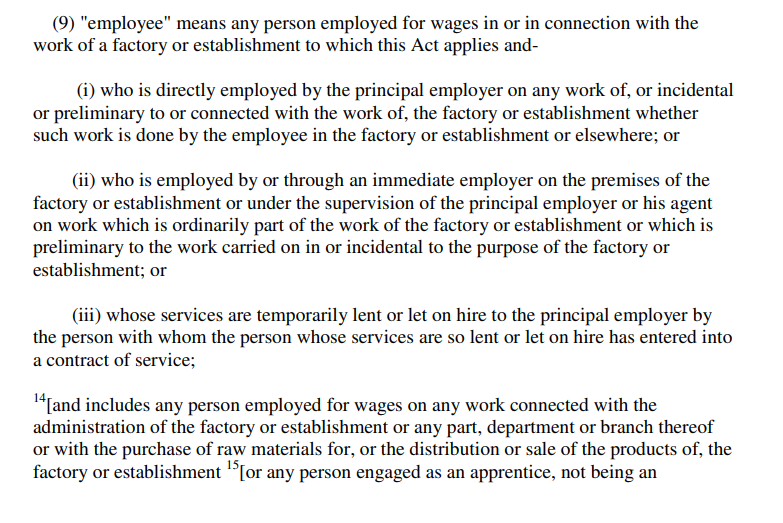 Are trainees subject to the Minimum Wages Act, 1948?

Trainees, especially in the private sector have to be paid the notified Minimum wages. The Minimum Wages Act contains a listing of the scheduled employment. As per the Act, temporary or probationers under scheduled employment must receive a minimum rate of wages as notified.
The Ministry of Labour and Employment, through its Notification G.S.R 680 (e) dated 22nd September 2014 notified the minimum wages to be paid to trade apprentices.

This minimum rate is calculated as a percentage of the salary of semi-skilled workers of the respective State or Union Territory. The percentages are as follows:

In the event of a State or Union Territory not notifying the minimum wages then the lowest minimum wages of the scheduled employment for semi-skilled workers shall be considered for calculating the stipend. 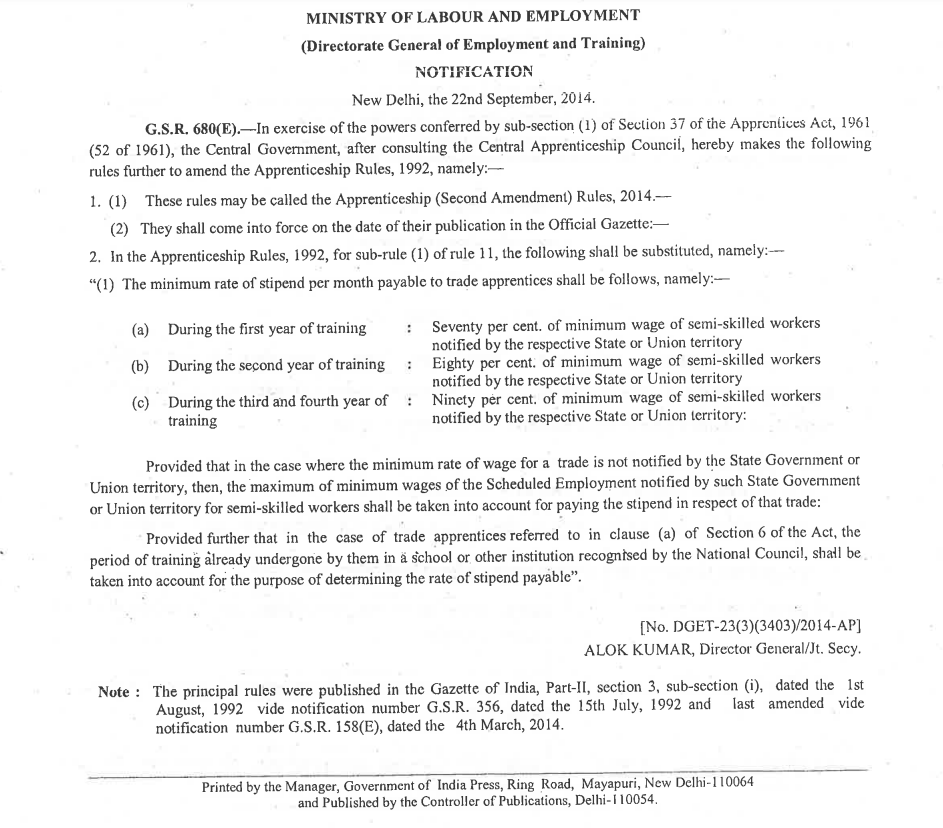 Are Trainees eligible for Bonus?

Where the trainees are engaged under the Apprentices Act, 1961, they will not be entitled to a Bonus under Sec. 2(13) of the Payment of Bonus Act, 1965. The Apprentice is not considered an ’employee’ and is, therefore, not eligible to receive a Bonus.

If the trainee has not been engaged under the Apprentice Act, 1961, then the trainee is eligible for a Bonus under the Payment of Bonus Act, 1965 subject to satisfying Sec.8 of the Act.

Are Trainees eligible for Maternity benefits?

A trainee with one surviving child, engaged as an Apprentice under the Apprentices Act, 1961, may be granted maternity leave for 90 days from the date of its commencement without payment of the stipend, and the apprenticeship training period shall be extended accordingly.

The apprentice is eligible to receive the stipend during the extended period.

A woman trainee can also avail of the benefit under the Maternity Benefit Act, provided she satisfies Sec. 3(o) and Sec. 5(2) of the Act.

From the available information, we can understand that

GetifyHR has gained tremendous experience in handling these issues. Our Payroll Outsourcing Module is perfectly designed to handle all aspects of Payroll processing like generation of Payslips, Leave and Attendance, and Statutory requirements like EPF, ESI, PT, and TDS. Ours is a one-stop solution for all Payroll related issues.